However, a separate list will be drawn up of artists condemning Russian aggression — their compositions will be exempted from the ban.

Restrictions will apply until the liberation of all occupied Ukrainian territories and the cessation of Russian aggression.

Verkhovna Rada also adopted a law banning the import and distribution of books and other publishing products from Russia, Belarus, and the occupied territories of Ukraine.

However, the law does allow for the import of Russian-language books from publishers in other countries once a permit is granted.

“Over 50 generals and officers of Ukrainian military were eliminated in the strike” including members of the high command, said Russian Defense Ministry spokesman Igor Konashenkov.

The spokesman also said Russia destroyed a tank repair plant in Kharkiv as well as 10 howitzers and up to 20 military vehicles in Mykolaiv in separate missile strikes.

DW was not able to independently verify the claims.

A leading Russian policy figure has slammed Lithuanian restrictions on rail transport between the Russian exclave of Kaliningrad and the rest of Russian territory, calling them an “incipient blockade.”

“As an EU member state, Lithuania is violating a whole series of legally binding international legal acts,” wrote Konstantin Kosachev, who is deputy head of Russia’s Federation Council, in a Telegram post. As an example, he cited the partnership agreement between the European Union and Russia, which includes guarantees of non-interference in each other’s transport networks.

Since Saturday, Lithuania has banned the rail transport of goods subject to Western sanctions through its territory to Kaliningrad, which lies between Lithuania and Poland.

The governor of Kaliningrad, Anton Alikhanov, has said what he called an “illegal” ban affected 40-50% of all transit goods, such as building materials and metals.

In recent weeks, there have been several calls on Russian state television for a “corridor” to be set up to facilitate access between the main territory of Russia and Kaliningrad. Establishing such a zone would, however, imply a Russian attack on Latvia and Lithuania, both NATO states.

Ukrainian President Volodymyr Zelenskyy has promised to “take back everything that belongs to us” in the south of Ukraine.

“We will not hand over the south to anyone,” he said in an overnight video address made after he returned from a visit to front lines in the region, which has been under attack by invading Russian forces.

He said safe access to the sea would also be restored in the process and that Ukraine would do its utmost to allow safe food exports from its ports with international help when this became possible.

From early on in their invasion, Russian troops have taken large parts of southern Ukraine, including the entire Ukrainian coast on the Sea of Azov and parts of the Ukrainian Black Sea coast.

A Russian commander declared in April that he wanted Russia to take control of southern Ukraine and even the disputed region of Transnistria in neighboring Moldova.

Russian troops invading Ukraine are probably suffering from “especially troubled morale” amid high casualties, combat stress, pay problems and perceived poor leadership, according to an intelligence update from the British Ministry of Defence.

“Cases of whole Russian units refusing orders and armed stand-offs between officers and their troops continue to occur,” the update said. It added that Russian authorities could have difficulties in penalizing any dissension in the ranks owing to Moscow’s definition of its invasion as a mere “special military operation” rather than a war.

Artillery bombardments by both sides were ongoing in the contested Donbas region as Russian forces focus on the region around Sievierodonetsk, the update said, adding that there had been little change in the front line.

It said Ukrainian forces are likely experiencing “variable” morale and desertions as well.

Svyatoslav Palamar, a deputy commander of the Azov battalion, and Serhiy Volynsky, the commander of the 36th Marine Brigade of the Ukrainian Armed Forces, were transferred to Russia from the separatist-held Ukrainian province of Donetsk, the agency said, citing an unnamed Russian law enforcement source.

TASS said other Ukrainian officers were also transferred to Russia.

Hundreds of Ukrainian fighters were captured by Russian forces in May after a monthslong brutal siege of the plant, whose underground bunkers and tunnels became the last stronghold for defenders of the city. The fate of the fighters has been uncertain, with Moscow saying at the time that they had been taken to the self-styled Donetsk and Luhansk people’s republics.

Kyiv wants all the fighters handed over in a prisoner swap with Moscow, but some Russian lawmakers want some of the fighters put on trial. 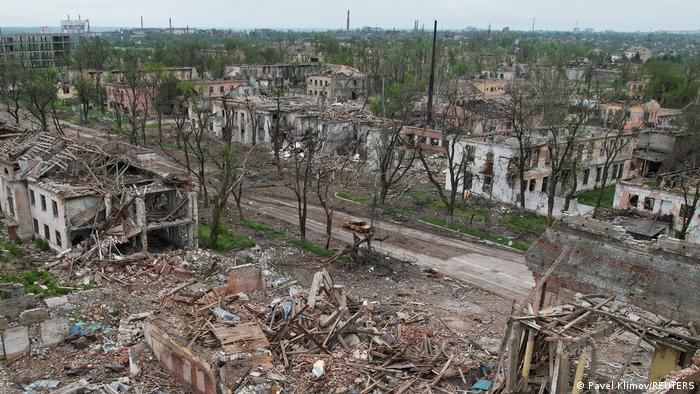 Serhiy Haidai, the governor of Luhansk, asked the West for additional weapons as Russia pounds his region with artillery. There are “no safe places left,” he said.

Haidai called for a quick delivery of long-range weapons before Russians can encircle the city of Lysychansk, cutting it off from Ukrainian supply lines.

In an editorial for The Sunday Times, Johnson called on Ukraine’s allies to have “the strategic endurance to survive and eventually prevail.”

He urged sustained support or else the European continent risked “the greatest victory for aggression” since World War II. In his 1,000-word missive, Johnson wrote, “Time is now the vital factor.”

Scholz: G7 will support Ukraine ‘for as long as necessary’

German Chancellor Olaf Scholz said the Group of Seven nations will underline their commitment to support Ukraine “for as long as necessary” at their upcoming summit in the Bavarian village of Elmau.

In an interview with Germany’s dpa news agency published Saturday, Scholz said he wants to use next week’s meeting with fellow G-7 leaders to discuss Ukraine’s long-term prospects.

“We will continue to support Ukraine for as long as necessary,” Scholz was quoted as saying. “We want to make sure that Russian President (Vladimir Putin’s) calculations do not work out.”

“Putin obviously hopes that everything will fall into place once he has conquered enough land and the international community will return to business as usual,” he added. “That is an illusion.”

He also praised his predecessor Angela Merkel’s diplomatic overtures towards Russia while remaining critical of her energy policy for emphasizing Russian suppliers rather than diversity of supply.

What happened in Russia’s invasion of Ukraine on Saturday

Civilians sheltering at the Azot chemical plant in Sievierodonetsk refused to evacuate, the governor of Ukraine’s Luhansk region, Serhiy Haidai, said on Sunday. He also said that despite the destruction of all bridges leading to Sievierodonetsk, there are ways to evacuate people from the city and bring needed goods.

Ukrainian President Volodymyr Zelenskyy visited soldiers on the southern front line during a working trip to the Mykolaiv region. Ukraine’s defense intelligence directorate said that five Ukrainian civilians have been returned in a prisoner swap with Russia.

Ukraine’s prime minister estimates the total cost of damage to infrastructure since the start of the war at $104 billion (roughly €99 billion). Speaking on Saturday at the British-Ukrainian Infrastructure Summit, Denys Shmyhal outlined some of Ukraine’s and the EU’s financial estimates for the costs incurred since Russia began its invasion on February 24.

German Chancellor Olaf Scholz said an EU candidate status for Ukraine is “necessary.” Ukrainian President Volodymyr Zelenskyy said his country joining the European Union would be a gain for the bloc.

German police said they were investigating several hundred potential Russian war crimes in Ukraine, including political and military officials suspected of being linked to the alleged offences. Germany applies universal jurisdiction which allows a foreign country to prosecute crimes against humanity, war crimes and genocide, regardless of where they were committed or by whom.

British Prime Minister Boris Johnson said he would “love it” if Ukraine could organize the next Eurovision song contest after its Kalush Orchestra won the competition last month. It is customary for the winner of the annual pan-European contest to host the event next year.

Due to the ongoing war on Ukrainian territory, however, Eurovision officials said the tradition would not be followed this time, and that the UK might be asked step in instead. Ukraine protested the decision.

You can revisit our updates from Saturday here.