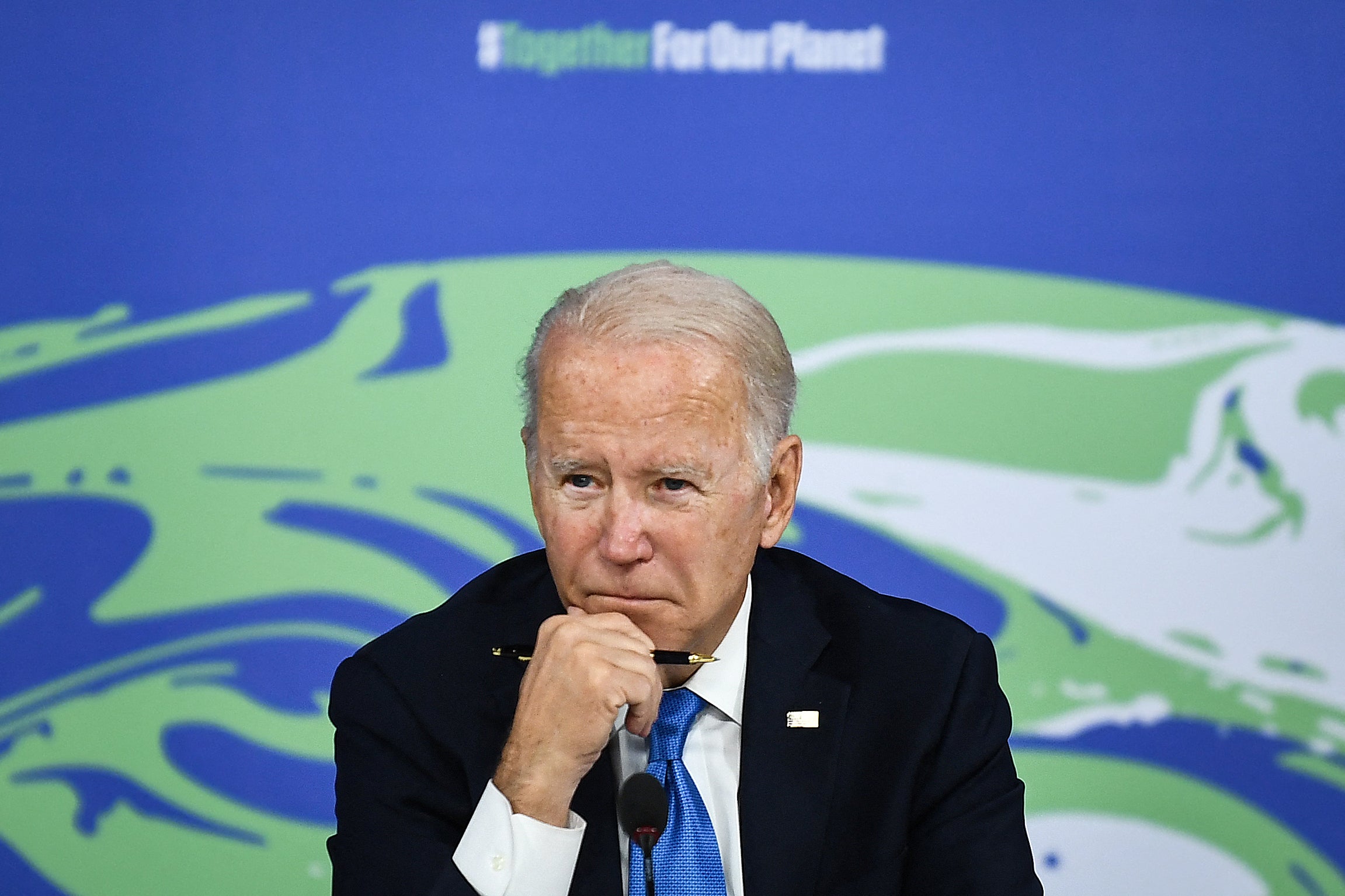 He and his advisers have spent the first two days of the international climate conference known as COP 26 trying to persuade world leaders that U.S. actions will add up to a 50 percent emissions reduction over nine years.

“There are a number of paths to get to where we need to go in terms of our 2030 commitment,” White House climate adviser Gina McCarthy said in an interview with NPR.

The administration is expected to release a policy road map during the two-week conference to show how Biden’s nationally determined contribution, or NDC, would be achieved.

“You know, when the president announced his 50 to 52 percent emissions reduction target in April of this year, he articulated it in a way and based on analytical grounding that showed multiple pathways for multiple sectors to achieve what the United States needs to meet the scientific imperative here,” a senior official with the Biden administration told reporters Monday.

Over those months, there’s been a persistent gap in the White House’s calculations: how much the massive climate package now before Congress would help the U.S. achieve its NDC.

Analysts say they’re still crunching the numbers since Congress scrapped plans for a $150 billion incentive-and-penalty package to decarbonize the power grid. The bill now boasts $555 billion in climate-related spending and would be the most consequential U.S. climate law ever enacted—if it passes.

Robbie Orvis, senior director of energy policy design at Energy Innovation, said he is still analyzing the House version, but agreed with the White House’s estimate that the bill would yield about a gigaton of emissions reductions by 2030 without the Clean Electricity Performance Program.

“We found that the previous set of spending without the CPP was getting between 850 [million] and 1,100 million metric tons [of carbon dioxide abatement],” he said, referring to the clean energy program. “And that was without reallocating the spending from the CPP, which has gone into several important programs, for example, things, providing assistance to industry to help them decarbonize.”

If the bill does yield a gigaton of CO2 abatement by the end of this decade, as the White House claims, Orvis said that would be about half the reductions needed to deliver Biden’s promise to halve emissions by 2030. The rest could be made up in executive actions like regulation and procurement, and in state-level policies.

Jesse Jenkins, a professor of mechanical and aerospace engineering at Princeton University who heads ZERO Lab, said in a Twitter thread that the bill, without the CEPP, would result in 350 million more metric tons of CO2 equivalent than the original package with that program. The CEPP accounted for a quarter of the original bill’s reductions, he said.

“If Congress fails to pass ANY new legislation, existing policies would leave the U.S. more than 1.1 billion tons of CO2 short of the President’s 2030 climate commitment,” he wrote. “It is unlikely regulatory measures alone could close a billion ton gap.”

Other analysts have mapped out the kinds of policies that could help close that gap.

The Rhodium Group released a report last month that attempted to show how the U.S. could reach Biden’s 2030 target (Climatewire, Oct. 19). It assumed Congress passed a climate spending bill that lacked both the CEPP—which is out of the bill—and a fee on methane emissions from energy production—which, for the moment, is still in the bill.

“We haven’t modeled the announced package on its own, but from what we know so far, yes, it’s roughly in line with what we modeled for congressional action in our ’Pathways to Paris’ report,” said Maggie Young, a spokeswoman for Rhodium. “So, if this were to pass, along with the subsequent executive branch and subnational actions that we modeled in the report, this combination of actions would likely put the 2030 target within reach.”

But to get there, Rhodium assumed EPA and other agencies would create a host of rules for sectors that have yet to be regulated for greenhouse gases, from chemical factories to liquefied natural gas terminals to petroleum refineries.

It also envisioned muscular rules for sectors that have been regulated for carbon—like power plants—that would leave Obama-era regulations in the dust and test the boundaries of legal defensibility.

For example, the Obama-era rule for new power plants—which is still on the books—mandates that coal-fired power plants capture 40 percent of their emissions via carbon capture and storage. That requirement would be replaced with a 90 percent CCS mandate for new coal- and gas-fired power plants in a rule that would take effect next year, under the Rhodium analysis.

For existing power plants, Rhodium sees an 80 percent CCS mandate phased in for coal- and gas-fired units by 2030.

‘Still work to do’

On Friday, the Supreme Court announced it would review a decision by a lower court that could have the effect of limiting future EPA power sector rules (Greenwire, Nov. 2). It’s effectively a challenge brought by red states and coal companies to the now-defunct Obama-era Clean Power Plan—a rule that promised to reduce carbon emissions 32 percent below 2005 by 2030 when it was finalized in 2015.

Biden has set the goal of cutting power plant emissions 80 percent by 2030, and zeroing them out five years later.

It’s not clear if the Supreme Court would make it harder for EPA to promulgate aggressive regulations even if it did agree with the Republican challengers, and EPA has said it is moving ahead with a replacement rulemaking for the existing fleet.

But the move underscores that Biden’s efforts to fulfill his climate commitments don’t begin and end on Capitol Hill.

The administration is expected to release new details in the coming days in the form of a U.S. National Climate Strategy. The strategy has been promised since the president unveiled his Paris Agreement pledge in April.

“I think it’s near final,” said John Podesta, former President Obama’s climate adviser, on a call with reporters. “I wouldn’t be surprised if in the course of the Glasgow meeting the details begin to move out, but I think there’s still work to do.”

The legislation now before Congress sets a “baseline for what the national climate plan will look like,” said Podesta.

When its future is known, he said, “other actions by the government begin to fill in the whole picture of the strategy that the administration will take to achieve what it’s promised the world.”

“The math becomes easier to do, more clear and more certain,” he added.

How Snakes Breathe while Crushing Prey

Who Is Liable when AI Kills?

Epsiode 34 – Hardest Hikes in the Catskills