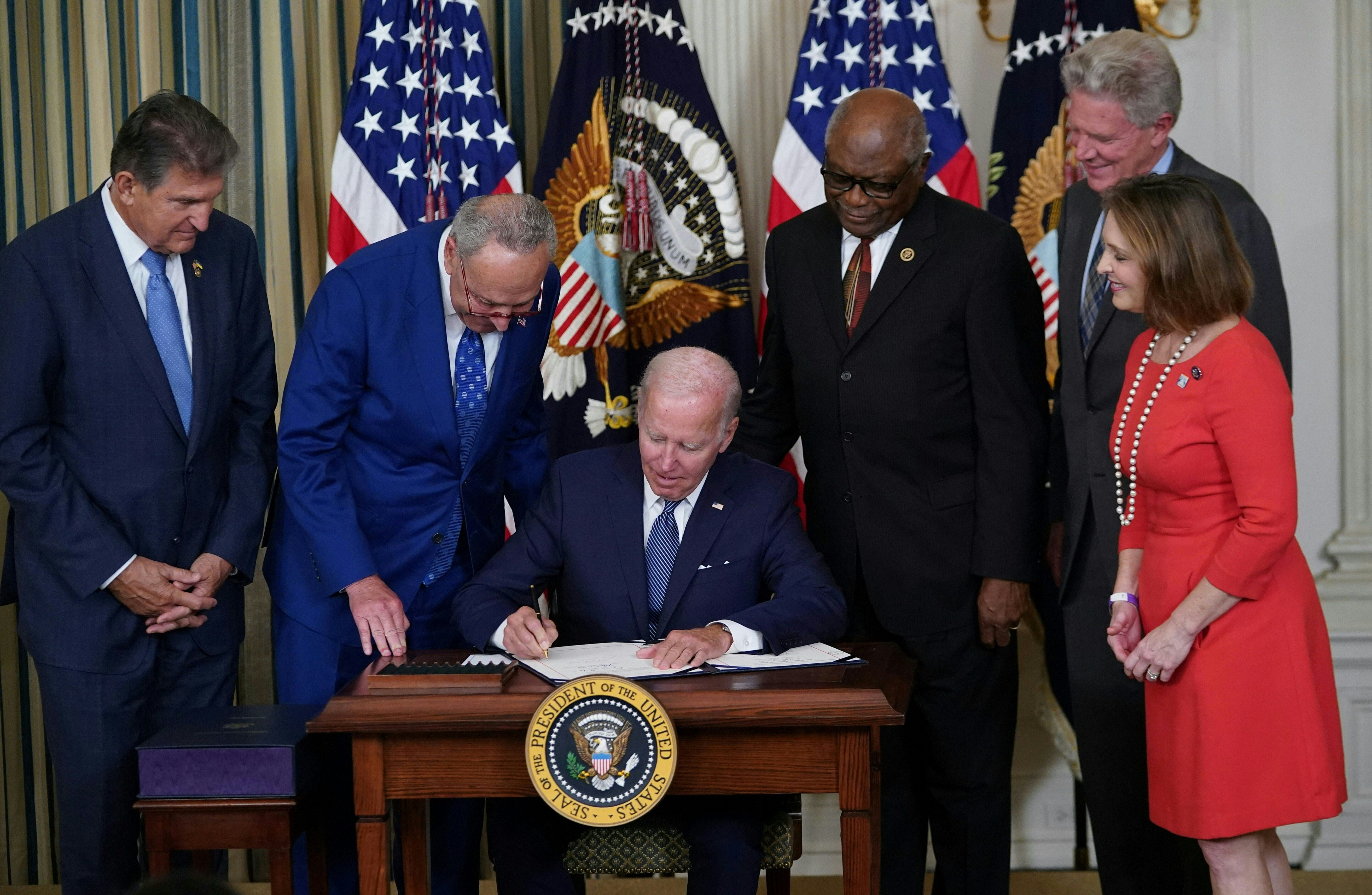 Several US agencies, including the National Oceanic and Atmospheric Administration (NOAA) and the Department of Energy (DOE), will see a significant influx of cash from a massive climate and tax bill that US President Joe Biden signed on 16 August. Scientists around the world welcome the legislation, called the Inflation Reduction Act, which pledges US$369 billion in climate investments over the next decade — while acknowledging that more work is needed to counter global warming.

The legislation would cut US greenhouse-gas emissions by about 30–40% below 2005 levels by 2030, scientists estimate, bringing the country closer to delivering on its pledge of a 50% reduction, which Biden made last year. And it signals to other nations that the United States, a major emitter that has historically pumped the largest share of greenhouse gases into Earth’s atmosphere, is on board to address climate change, scientists say.

After former president Donald Trump took steps away from climate action, “it returns the US to a position of leadership”, says Michael Mann, a climate scientist at the University of Pennsylvania in Philadelphia. “It helps create a global climate for action.”

That’s because the 2015 Paris climate agreement — which aims to limit the global average temperature rise to 1.5 °C above pre-industrial levels — works on the basis of ‘reciprocal action’, says Michael Pahle, an energy researcher at the Potsdam Institute for Climate Impact Research in Germany. That means that governments take the actions of other nations into account when setting their climate agendas.

If the United States hadn’t raised the bar with this legislation, many countries could have eased off their own commitments by pointing to its inaction despite its big responsibility, Pahle says. “The Paris mechanism is all about reciprocity, and large emitters are decisive in setting the standards.”

Through a competitive grant programme, it also funds research into eco-friendly jet fuel, thereby curbing emissions from air travel. And it provides $60 billion in grants and tax credits for clean-energy investments and projects to clean up pollution in disadvantaged communities.

The biggest chunk of money from the legislation goes to clean energy, with $128 billion in tax credits over the next decade for businesses shifting to greener power sources, such as solar, says Brian O’Callaghan, an economist at the University of Oxford, UK. That’s about 13% of today’s renewable-energy market. “The scale of this bill is enormous, particularly on energy,” O’Callaghan says.

More than $60 billion is slated to go to US manufacturing of clean-energy technologies, such as solar panels and electric vehicles, and billions more are included in tax credits for decarbonization, clean-vehicle purchases and household-level efficiency improvements — making this the largest climate investment in US history.

Despite their excitement over the legislation, scientists say the United States must do more. Even if all nations hit their climate targets, the global temperature will rise above the 1.5 °C mark, says Roxy Matthew Koll, a climate scientist at the Indian Institute of Tropical Meteorology in Pune.

Low- and lower-middle-income nations would be the most affected, he says. “South Asia, particularly India, is already in a hotspot, with a threefold rise in extreme rains, 50% increase in cyclones from the Arabian Sea and rising heatwaves in the recent decades,” he says.

Mohamed Adow, a climate-policy expert at Power Shift Africa, a think tank based in Nairobi, says the United States needs to take responsibility for its historical emissions and help to deliver the climate finance promised to poorer nations in the Paris accord. Rich nations pledged to give $100 billion a year until 2025 to poorer ones, but the money has not materialized. “That’s what we need to see for a real jump in progress on the global stage,” he says.

Ideally, poorer nations, which will be most affected by global warming, would benefit from this enormous US investment, researchers say. For that to happen, the Biden administration needs to craft foreign policy that allows for knowledge sharing, says Shayak Sengupta, an energy-policy researcher at the Observer Research Foundation America, a Washington DC-based affiliate of an Indian think tank. “All of this industrial policy will create know-how and goods that can flow between the United States and other countries if we design the policy incentives correctly.”

Whether the legislation will build goodwill among lower-income nations ahead of the next international climate summit, to be held in Egypt in November, is unclear, Sengupta says. “Some countries may view this bill as long overdue and as the bare minimum on the part of the US.”

The United States is where the European Union was a decade ago in terms of climate action, Pahle says. Even with the Inflation Reduction Act, green investments by the United States since 2020 lag behind those of France, Italy and South Korea when historical emissions are factored in, according to data from the University of Oxford’s Global Recovery Observatory.

The Inflation Reduction Act isn’t perfect, Mann says. But rather than carping on the limitations, critics should take the win and encourage people to vote in the US midterm elections in November, he adds. Crucial seats in the US Senate and House of Representatives will be up for grabs. “My hope is that there will be an even larger majority of climate-forward legislators in Congress after the midterm elections — a large enough majority that we can pass legislation with more stringent measures.”

This article is reproduced with permission and was first published on August 16 2022.

The Universe Is Not Locally Real, and the Physics Nobel Prize Winners Proved It

See Which Countries Have the Most Interconnected Wildlife Preserves

How to Tell if Your Cat Loves You, According to Science